Join us for a special documentary screening

"It began as a housing marvel. Two decades later, it ended in rubble. But what happened to those caught in between? The Pruitt-Igoe Myth tells the story of the transformation of the American city in the decades after World War II, through the lens of the infamous Pruitt-Igoe housing development and the St. Louis residents who called it home." Read more about this important documentary.

An interactive discussion to follow with Dr. Fred McGhee and Dr. Elizabeth Mueller.

Tickets must be purchased at the door
Seating is limited; plan to arrive 30-40 minutes early

Part of the AMOA-Arthouse 2012 Spring Rooftop Architecture Film Series
(The rooftop opens at 5:30, for those who want to come early)

Presented with the Mid Tex Mod chapter of Docomomo US in collaboration with Light / The Holocaust & Humanity Project, put on by Ballet Austin. Special thanks to the UT-Austin Student Preservation Association!
Posted by Jenni Minner at 7:21 PM No comments:

Email ThisBlogThis!Share to TwitterShare to FacebookShare to Pinterest
Labels: Events

O'Neil Ford's Campus Architecture: A Sense of Home and Place 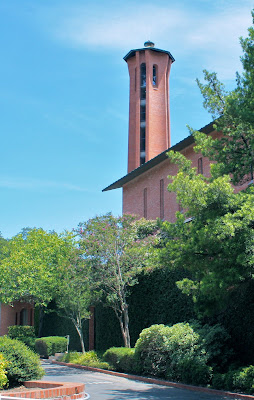 This couldn’t be more true – O’Neil Ford is the architect of my life, and a fairly great portion of my time, throughout my four years at Middlebury College, has been spent attempting to understand why. When I arrived at Middlebury, after having spent a gap semester in Texas and Mexico, thoughts of my high school wouldn’t leave my mind. I consigned my feelings to nostalgia – a normal state of mind, I thought, considering my distance from home. It wasn’t long, however, until I realized that it wasn’t just the people that I missed – it was the place. My mind would go back to the outdoor courtyards with their hard wood benches and the low walls surrounding those courtyards. I thought about the small fist-size stones that were set to pave the mini courtyard where the benches were, and I thought about the way that the irregular paving stones, round on top, would cause the soles of our shoes to bend over the rocks we balanced on them. My mind went back to the way the library scanner’s dinging would bounce off the gleaming, cold tiles on the library floor. Yes, I missed many parts of high school – the teachers, the friends – but most of all, I missed the place.

It didn’t take much time – just four months of being removed from Texas– for me to realize that this place was unique – that my school, Saint Mary’s Hall, was a school not like many others. I realized that I talked about my school in a different way than the way in which my friends spoke of theirs. My school wasn’t just a place – it was a home.

Ford’s ability to make a home environment within a school setting began with his work on Trinity University during the campus’ move from Seguin to San Antonio in 1949. Trinity’s new campus, like that of Saint Mary’s Hall, was built on an empty (and at that time) rural site. In the case of Trinity, the site was an old quarry, the tallest part of which gave striking views of downtown. The dorms, which maximize the use of such a natural site, give students the best access to views, to nature, and to each other. One cliff in particular, between the student center and the easternmost dorms, creates a natural grotto of vines and trees through which a stream runs over mossy, shaded rocks and into shallow moss-filled pools.

I grew up just around the corner from Trinity and have many memories of riding my bike on the campus trails. As I grew older, I realized there was much about the campus still to be discovered. In high school, after my tennis practices on the Trinity courts, I would walk around the campus for hours and peek into empty buildings, which were dark with age and cool from the tile floors. Outside, after my way through one breezeway and then another, I would step out onto the neighborhood streets and make my way back home.

In 1949, Ford was directed by consulting architect William Wurster at Trinity, “Get rid of all this anonymous Texas space. Bring the buildings close together. Create significant spaces.” Looking at the Trinity campus now, one can see that Ford put Wurster’s advice to use. Each aspect of the campus, from the brick-walled, tile-floored buildings to the small courtyards and gathering spaces, comes together to ensure that Trinity is a school that truly feels like home.

Isabel Howard is from San Antonio and recently graduated from Middlebury College with a degree in History of Art and Architecture. The blog entry above was a partial excerpt from her thesis, At Home in the Campus Architecture of O’Neil Ford.

More about the upcoming O'Neil Ford Symposium
Posted by Mid_Tex_Mod at 6:00 PM No comments: 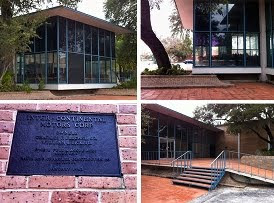 Read more about O'Neil Ford's Inter-continental Motors on our blog.

Vote on Dwell's site to support Texas Modernism!
Posted by Mid_Tex_Mod at 5:18 PM No comments:

We need your help! Dedicated O'Neil Ford fans have entered an outstanding example of Texas Modernism to Dwell's Rethinking Preservation contest. A panel of judges will select the winner from the top ten entries that receive the most votes. Dwell will donate $10,000 to a worthy preservation organization. Follow this link to vote for it and help us spread the word. 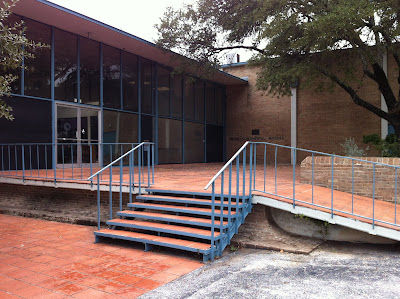 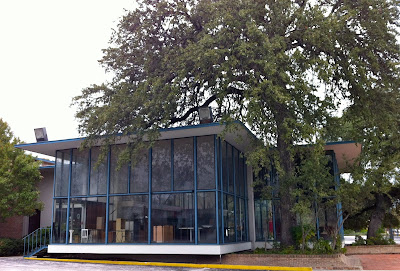 The Intercontinental Motors Building at 3303 Broadway in San Antonio, Texas, is one of the last remaining examples of O’Neil Ford’s pure Texas Modernism. Glass-walled, light, and airy, the showroom, at its opening in 1964, was dubbed “One of the World’s Most Beautiful Dealerships” by Weathervane magazine. Now the building's glory days are a distant memory, waiting to be revived.
When the Intercontinental Motors Corporation moved its headquarters to San Antonio in 1964, the President, Charles F. Urschel, Jr., called his old friend O’Neil Ford to design the new building. At that point, Ford was well-reputed as a regionalist who built Texas buildings out of wood, tile, and stone. Ford, however, was also a Modernist. Close friends such as Urschel trusted Ford’s ability to blend Modern design with Texas materials.
After choosing a large, shaded lot just along the banks of the San Antonio River, Urschel and Ford’s design team constructed a front piece that would catch the eye of any citizen driving along down Broadway. Framed by two large trees, the front showroom gleamed with tall windows, Saltillo-tile porches, and polished metal from wall to wall. The most Miesian of Ford’s designs, the building still boasted some class Ford details, such as the concrete coffered ceiling. 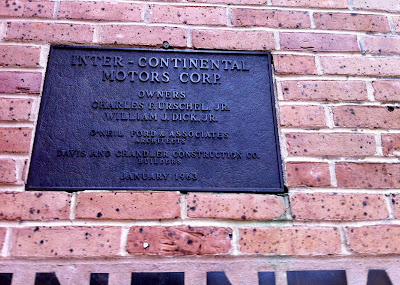 Ford’s partner Howard Wong once said: “[Ford] couldn’t do a pure Mies building to save his life.” Pure Mies it may not be. It's better. Think commercial vernacular meets High Modernism - Texas-style. Inter-Continental Motors is an outstanding opportunity for the creative reuse of a dust-filled showroom, too long forgotten, to become an icon of popular Modernism once again.
Vote for Inter-Continental Motors. San Antonio deserves recognition and support for its modern architectural gems.
Posted by Jenni Minner at 1:59 PM No comments:

Mid Tex Mod is a chapter of Docomomo US

We seek to raise awareness of the Modern Movement in Central Texas and the value of documentation, preservation, and sustained use of buildings, sites, neighborhoods, landscapes, and other manifestations of modernism.

Join Docomomo US and you will become a treasured member of our regional chapter!